I was browsing through the source code of the JavaScript driver for RethinkDB the other day, and I came across a clever pattern that was too good not to write about. RethinkDB is an open-source JSON document store that I’ve heard nothing but good things about, but unfortunately I haven’t spent too much time with it myself. Instead, this post is about a JavaScript pattern in their driver code, which is actually implemented in CoffeeScript. Let’s take a look. 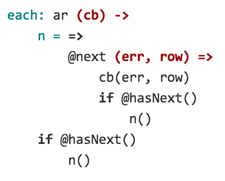 I noticed many of their driver methods are defined with this weird ar syntax, as seen in the first line. I consider myself fairly familiar with CoffeeScript but this one stumped me for a bit - is it a keyword? Some weird piece of CoffeeScript method definition syntax that I missed out on? Some snooping revealed that ar is actually an ordinary method defined in drivers/javascript/src/base.coffee. Here’s the definition:

From the description: “function wrapper that enforces that the function is called with the correct number of arguments”. Neat! But how does it work? Let’s deconstruct that first line.

This looks pretty unusual at first glance, but if we recall how CoffeeScript works, functions will always return their final value. Hence, ar is a function that takes a function as a parameter, and returns a function in turn. This can be a little confusing in CoffeeScript syntax, so let’s do things explicitly in Javascript.

As it turns out, the args parameter in the inner function isn’t quite right because of how CoffeeScript handles splats. We’ll cover that later - let’s look at the inside of the ar function first.

We saw earlier that ar takes a function and wraps it with an argument checker. If the number of arguments match up, it just passes arguments through to its wrapped function. Let’s look at one final explicit example:

In this example someObject is an object with a single method sayHello that takes exactly two arguments and prints a message to the console. We’re using the arguments object instead of explicitly passing parameters into the inner function, as this is how CoffeeScripts ... splat works internally and allows us to accept variable length arguments.

Now let’s see what happens if we call sayHello with an incorrect number of arguments:

Just as expected, we’ll get an error if we don’t pass in exactly 2 arguments, as expected in the definition of greet (which sayHello is wrapping with argCheck)

Hopefully it’s a little clearer what ar does at this point. It’s a clever way of enforcing function arity, and keeps code very DRY. Although examples of JavaScript may be more illustrative, the CoffeeScript code in the driver is much less obtrusive and more elegant.