I have always been an anxious person. It's a pervasive undercurrent, the constant voice of 'no' in my head; No, I don't want to go to that party where I only know one person. No, I'll talk to that girl tomorrow. It's all too easy to succumb to this voice, and I've been spending a lot of time thinking of what to do about it.

It goes without saying that there is no rhyme or reason to these anxieties. I've spoken in public successfully many times before, so why do I feel the same deep pangs of fear every time even the possibility arises? I've met new people lots of times, so why am I nervous about this time? I am well aware that the worst possible outcome of many things I worry about day to day is really not that bad, and that my life will be better if I just first put myself out on a limb. But even with that seemingly fully internalized, it's often very difficult to actually move past and act. Why is that? 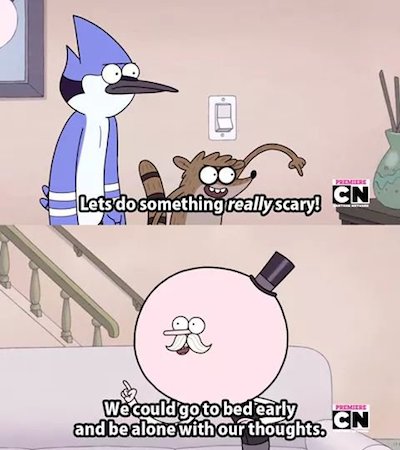 By the start of 2015 I was sick of it. My resolution that year was to stop living under the constant cloud of anxiety and nervousness. I used to think anxiety was something to be eliminated, through some combination of discipline and confidence, real or not. Fake it 'till you make it, right? I was convinced with some steely mental fortitude and a few changes in behavior, I would eventually cease to be an anxious person. Looking back a year later, 2015 was a fantastic year in many ways and certainly my best yet, but I still get anxious, same as anyone else. Instead of viewing the resolution as a failure though, I've instead changed my opinions a bit.

Note: this post is merely personal anecdotes and opinions. If you're concerned about your well-being, seek advice from a medical professional!

The single biggest conscious decision I made in 2015 was to say yes more often - that is, unequivocally saying yes to invitations and opportunities that arise on my path (and actually following through!) despite every internal scream that I could alternatively not do that. I still felt as anxious as ever when putting myself into new situations, meeting new people, or doing anything that made me feel the same way before, but maybe I was making progress? It takes a huge amount of effort to fight your instinct and follow through, but as expected I had a great number of positive experiences as a result of doing so. I plan to keep doing this for the foreseeable future.

Near the end of the year I kicked a longtime hesitation and started exercising regularly at the gym. Even that took a healthy nudge from my cardiologist. Unsurprisingly, it's been hugely beneficial both mentally and physically, so why such an enormous initial hump to overcome? With all of these things going so well for me, why was I still feeling the usual anxiety about these things?

For the longest time, I thought confidence was the key to eliminating anxiety. Surely once I'm more confident, I won't be nervous anymore about that new social situation / talking to that girl / interviewing that person, I thought. Believe it or not, some of the best advice I've heard comes from 2 Chainz on dating:

Q: 2 Chainz, I've never been in a relationship; how do I find the right one?

I worked on my confidence by investing in myself. I focused more than ever on developing personal interests, mastering my hobbies and my professional craft, liking myself, and trying to be generally an interesting person to spend time around, all while saying yes to new things. As a result, I am much more comfortable in my own skin. Still no luck in escaping anxiety though.

The result of all my efforts is that I am no longer convinced that the anxiety I feel in these situations is something that can be overcome entirely through sheer force of will, or something that will just go away after some point. Instead of focusing on eliminating anxiety, I think we ought to be measured by how we respond to it, and how we overcome the mental roadblocks that come up day to day.

A friend of mine has told me a bit about Stoicism, which I'm interested in studying more in depth. Ironically it teaches avoiding anxiety through control over one's emotions, which I am so far unsuccessful at, but it also stresses the importance of understanding the obstacles we face and not hiding from them. The things we avoid thinking about rule us most! When I feel nervous or generally uneasy, I try to clearly figure out and address why I feel that way, rather than trying to shy away from it. I might never stop being nervous about things, but I won't let it stop me, either.

At this point I should say it's okay to not be "on" 24/7. There's nothing wrong with enjoying time spent alone and taking a break from it all. I still choose to spend time by myself and recharge my batteries sometimes, and that's fine. You don't have to try to change the nature of who you are.

I've said nothing about the constant pressure to hide any notion of internal anxiety and fear from the outside world, and to appear as if everything is better than ever. This is something that particularly plagues startup founders and people in the tech industry, and fortunately is a subject I'm slowly starting to see more written about. Just this week Evgeny Tchebotarev, founder of 500px, wrote about the founder's battle for mental health. I don't think there's any amount of zen or confidence in the world I could possess that would prevent me from feeling anxious were I to start my own company one day. But I don't think that's important anymore. Here's to another year of confronting our obstacles head on instead!